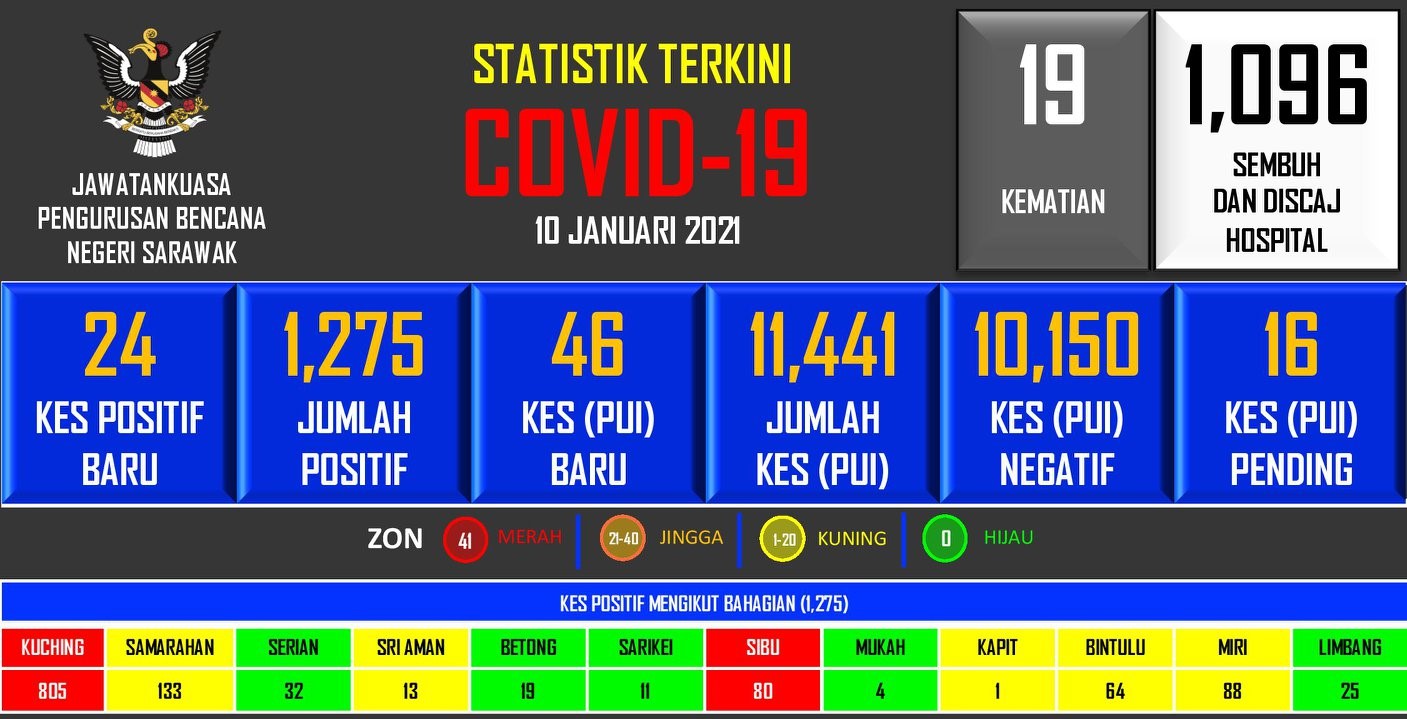 KUCHING: Sarawak has recorded 24 new Covid-19 positive cases on Sunday (Jan 10), with seven cases in Kuching, five in Miri, five in Sibu, two in Sri Aman and one respectively for Samarahan, Sebauh, Selangau and Serian.

Sarawak Disaster Management Committee (SDMC) in a statement today said this brings the total number of cases to 1,275 cases.

Of the seven cases recorded in Kuching, two were Import-B cases which are cases infected while at high-risk Covid-19 infection areas and five were local transmissions.

The two Import-B cases, Cases 1,253 and 1,255 had no symptoms and were undergoing quarantine after returning from Kuala Lumpur International Airport (KLIA) on Jan 8 and were tested positive on the same day.

Cases 1,270, 1,271 and 1,275 are family members who have just returned from Kuala Lumpur International Airport and did not show any symptoms while Cases 1,272 and 1,273 have had close contact with Bah Sayap Cluster.

Import-C cases were reported in Sri Aman in which Cases 1,262 and 1,263 are husband and wife who had close contact with Case 1,175 at Rumah Langi, Pasai Siong, Sibu on Dec 30 while Import-C case 1,258 is a housewife from Bintulu who visited a long house in Pasai Siong, Sibu for Christmas and New Year but did not attend the funeral or visited other longhouses that are related to the Pasai Cluster.

One locally transmitted case was recorded in Sebauh — Case 1,257 — reported having a fever but does not have any travel history to high-risk areas or overseas.

Samarahan recorded one Import-B case where Case 1,252 is from Sabah who is reporting for duty and Selangau recorded one local transmission case in which Case 1,266 went for a screening before returning to Lawas passing through Brunei.

Serian recorded one local transmission case, Case 1,274, who is categorised as Import-C as she had close contact with Cases 1,211 and 1,212 who are linked to the Stutong Cluster.

Mador Cluster did not record any new cases making the total number of active cases in the cluster eight in which 1,238 individuals were screened and 1,230 were found negative.

Some say ok, some say not ok on the Computer Loan Scheme (SPK)