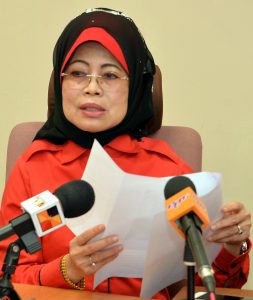 She stated this following Chief Minister Datuk Patinggi Abang Johari Tun Openg’s recent statement about putting the state’s wealth to good use by funding development projects, not just in urban centres but also in rural areas.

The decision was made following the federal government’s lacklustre support for the state’s vision.

Fatimah stated that under the Malaysia Agreement 1963, the federal government has definite responsibilities towards state affairs.

She continued: “With Pakatan Harapan (PH) taking over the federal government, development projects in Sarawak have plummeted since then. The funds for programmes and activities eventually decreased or are non-existent.”

Fatimah further added that the state must still progress even when funds are not “coming in.”

“Rather than wait until the cows come home, the state government has decided to go ahead otherwise we will forever be lagging behind other states in Malaysia.

“Thus, we will put our resources to good use. The Sarawak government has no choice,” she stated.

Citing a poem in responding to the issue, Fatimah read:

All in all, Fatimah questioned the sincerity of PH who seems to not show any sign of wanting to help in the state’s development.