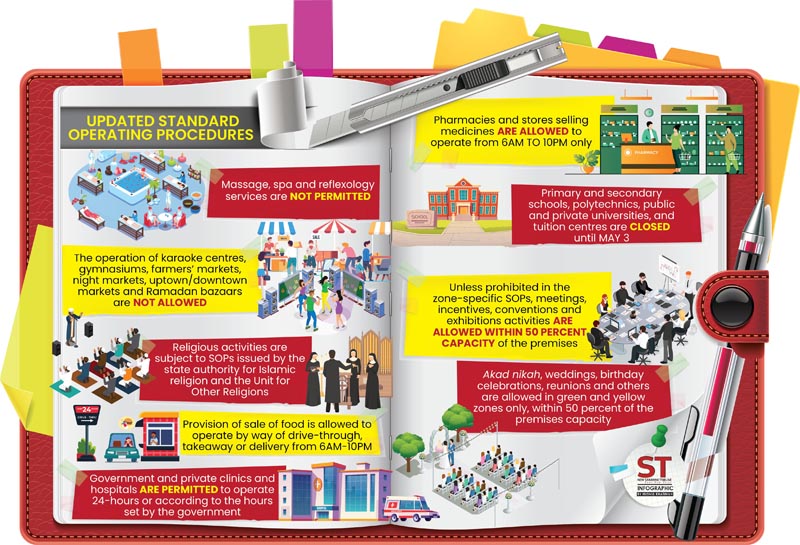 These SOPs will be effective until 11.59pm on April 26. In red zones, massage, spa, and reflexology services are not permitted, as well as the operation of karaoke centres, gymnasiums, farmers’ markets, night markets, uptown/downtown markets and Ramadan bazaars.

In addition, religious activities are subject to red zone-specific SOPs issued by the state authority for Islamic religion and the Unit for Other Religions (Unifor) for non-Islamic religions.

On activities in CMCO areas, businesses and economic and industry activities are allowed to operate as set by the government.

Restaurants and eateries are allowed to operate on a dine-in basis with a distance of at least one metre between customers according to table size, takeaways, deliveries, and drive-through from 6am to 10pm.

Government and private clinics and hospitals are permitted to operate 24-hours or according to the hours set by the government, whereas pharmacies and stores selling medicines are allowed to operate from 6am to 10pm.

Childcare centres, preschools, nurseries, and kindergartens are allowed to operate subject to approval from the relevant ministry or agency, except for nurseries and kindergartens in red zones which will be closed effective 12.01am on April 20 to 11.59pm on May 3.

Unless prohibited in the zone-specific SOPs, meetings, incentives, conventions, and exhibitions (MICE) activities are allowed with 50 percent capacity of the premises or a maximum of 100 people in attendance.

Face-to-face meetings for official business affairs held in hotel offices and other institutions as well as seminars, workshops, training courses, and conferences are permitted in compliance with the SOPs and with 50 percent capacity of the premises or a maximum of 100 people.

The organisation of social ceremonies such as akad nikah (marriage solemnisation), weddings, birthday celebrations, reunions, and so on are only allowed for zones with green or yellow status, and with 50 percent of the premises capacity or a maximum of 100 people in attendance.