SIBU: He was caught once, but it didn’t stop him from committing the same crime again.

A budget inn operator at Jalan Seduan here was caught stealing electricity for the second time in a joint operation recently by Sarawak Energy which was assisted by the Electrical Inspectorate Unit (EIU) of the Ministry of Utilities and the police. 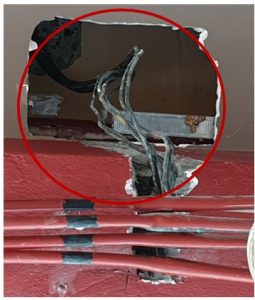 The operator had been under close surveillance by Sarawak Energy’s utility arm Syarikat Sesco Berhad (Sesco) for several months.  Sarawak Energy said the raid was triggered after analysis of billing records revealed relatively low monthly electricity consumption in comparison to the size of the business.

“The budget inn occupies a three-storey shophouse with a bistro/restaurant, karaoke (KTV) and sauna facilities. Actual electrical load reading taken during the operation showed that billing should have been around RM15,000 per month,” it said in a statement yesterday.

The power utility said the inn operator had tapped power supply directly from the incoming mains wiring to the inn’s distribution boards, bypassing all the nine electricity meters.

“This had significantly reduced power consumption registered by the meters.

A police report has been lodged and the meters and cables seized as evidence in the case against the budget inn operator who will be called in to assist in the investigation. Sarawak Energy said it will take legal action against the inn operator under Section 33(5) of the Sarawak Electricity Ordinance, which provides for a fine of up to RM100,000 or five years’ imprisonment or both.

The operator will also be charged for the accumulated arrears of the electricity stolen.

“Stealing electricity is a dangerous crime that jeopardises public safety. In this case, the inn’s guests were put at risk by the operator as tampering with electrical wiring can lead to fire, causing injuries and endangering lives.

“In our mission to curb power theft, we will continue to monitor ‘high risk’ customers. We will continue with our meter inspections and operations throughout Sarawak,” said Sarawak Energy.

Meanwhile, the power utility advised customers not to be duped by service providers claiming to be able to reduce electricity bills and allow premise owners to enjoy limitless electricity usage.

“Owners will be held responsible for the crime as the meters are registered under their names,” it warned.

Sarawak Energy advised members of the public to report power theft via the Sarawak Energy hotline at 082-443535, assuring that information will be kept confidential.

Why are government funds given to unelected reps?

‘SUPP will not betray Sarawak’

‘I’m not Minister of Everything Sarawak’

‘Its formation is despicable’

Bersatu pulls out of Pakatan Harapan