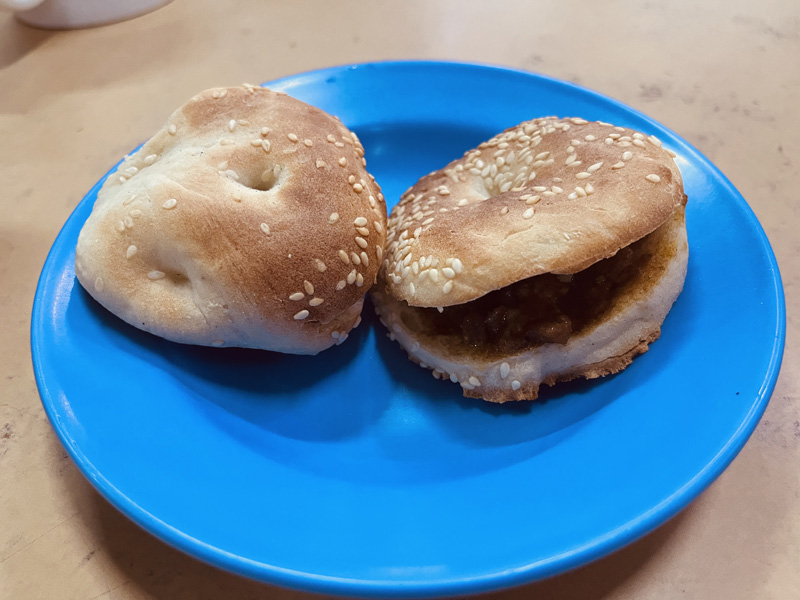 Wong said that it took her 12 years of following her father-in-law operating the business and learning all the recipes before he entrusted the business to her six months ago.

“The kompia we brought is from a local seller, but the filling is something I need to learn from my father-in-law. It is not easy. It takes me 12 years to learn and gain my father-in-law’s trust.

“There are three filling options available: Minced meat, plain, and rojak sauce. The most challenging recipe is the one with the rojak sauce. Therefore, I still require the assistance of my father-in-law to prepare the sauce.

“He will send me the rojak sauce from time to time,” she said when met by New Sarawak Tribune recently.

The mother of three also stressed the importance of learning all of the recipes in order to maintain the 59-year-old business’ (since 1963) reputation.

Wong said that the business began when her father-in-law (at the age of 13) rode his bicycle around town selling cendol and rojak.

“That’s how people know him. You can ask the residents of Sibu, particularly those who used to live in the Bukit Assek area, about Kedai Bukit Assek ‘Ah Hua,’ which was previously located in front of Sekolah Kebangsaan (SK) St Rita.

“Because business was brisk, he was urged by the local council to relocate to the Central Market, which is why we are here now,” she said.

Wong has done her best until now to ensure that the stall’s food and beverages are prepared in the traditional manner.

“We still have our regular customers here, so business is just as good as it was before.

“I even have to decline those who want to tapau (takeout) on weekends and holidays since I can’t handle running the stall by myself,” she said.

Apart from its kompia, which costs between 70 sen and RM1.20 per piece, Wong said that customers from near and far are drawn to its ABC Special beverage, which costs RM4, bubur buang panas (RM2), cendol (RM2), and rojak (RM6).

When asked what would happen to the stall should she ever decide to retire, she responded, “I will work as long as I can.

“But I’m not sure who will take over the business given that my three adult children are working in peninsular Malaysia and don’t seem interested in it,” she said.

Stephaney Christopher, 33, one of the customers, said that Kedai Bukit Assek Ah Hua is one of her childhood memories.

“When I was younger, I would only visit the stall to buy the rojak and the delicious kompia with minced meat filling. It was very affordable.

“I remember the apek who used to cycle and then set up shop in front of my school, SK Saint Rita.

“So, before I leave for school each morning, my parents and I will stop there. Those are my memories of it,” she said.

Meanwhile, another customer, who declined to be named, said that the stall’s kompia is one of the must-tries in Sibu.

“The minced meat-filled kompia is my favourite. It tastes like a handmade sauce that you won’t find anywhere else,” she said.