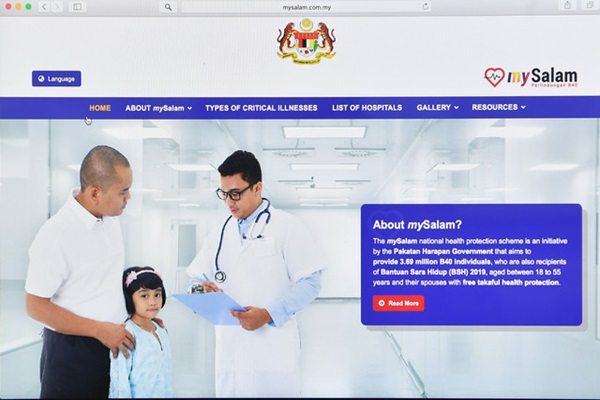 LUMUT: There is a need to intensify dissemination of information on government initiatives to help the people, including the National Health Protection Scheme (MySalam), as such schemes are like a lifeline for some, especially the less fortunate.

In the case of MySalam, many people generally are aware of its introduction on Jan 1 this year following a collaboration between the government and insurance company Great Eastern Holdings, which contributed a starting grant of RM2 billion to the trust fund, but do know how to apply for it and the details of the scheme.

For Nursuhaidah Omar, 40, she has heard about the scheme on television but did not know how to apply for it, especially when her husband was hospitalised for one month last February.

Nursuhaidah, who quit work to look after her husband Muhammad Azman Tabri, 41, after his left leg was amputated due to infection, was looking forward to all kinds of help to ease the family’s burden.

“I did receive a short message service (SMS) saying I was eligible for MySalam but I did not know where to refer to get it. If I can get some aid it will help to meet the medical costs of my husband who has to go for further check-ups at the Teluk Intan Hospital,” Nursuhaidah, who has seven children, told Bernama here today.

Single mother Noorhayati Said, 42, said she had heard of the scheme but did not know about its benefits like a daily hospital allowance of RM50 or maximum of RM700 a year for those suffering from any one of 36 critical illnesses.

“So maybe after this, the government should ensure that poor people like us can get to enjoy these benefits if our family members fall sick,” said Noorhayati, who has six children.

Food stall operator Baharuddin Abdullah, 57, said he had never heard about MySalam and was disappointed that not enough was done to ensure that the target groups are aware of the scheme and its benefits.

“By right such matters should have been given wide publicity so that low-income people like me are aware; it is hoped that after this the government will do something to ensure this scheme is better known by the people,” said Baharuddin, who has been selling food for more than 10 years.

Perak Health, Consumer Affairs, National Integration and State Resource Committee chairman A Sivanesan, when contacted, said the state government would look into ways to intensify the campaign for the scheme soon.

Discussions on this would be held with state Social Well-being, Women, Family and Social Welfare Development Committee chairman Wong May Ing, he said. – Bernama