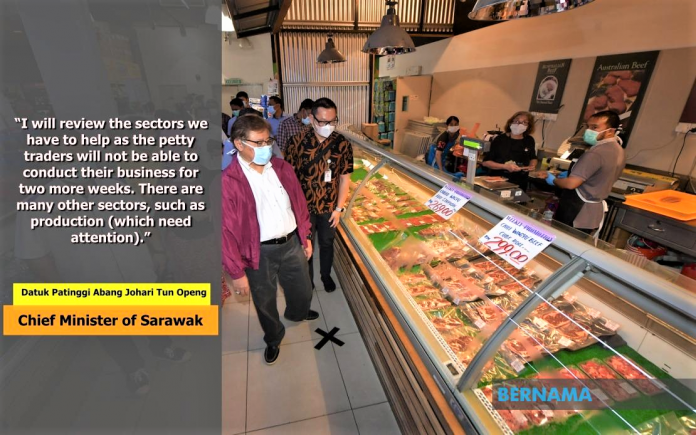 KUCHING: The Sarawak government will review the assistance package given to the people following the extension of the Movement Control Order (MCO) announced by Prime Minister Tan Sri Muhyiddin Yassin last Wednesday.

Chief Minister Datuk Patinggi Abang Johari Tun Openg said the extension of the MCO to April 14 will have an impact on various economic sectors which would have benefit from the Sarawakku Sayang Special Assistance Package announced last week.

“I will review the sectors we have to help as the petty traders will not be able to conduct their business for two more weeks. There are many other sectors, such as production (which need attention),” he said in the Bicara Naratif programme on TV1 last night.

On March 23, Abang Johari announced that the state government was allocating RM1.15 billion for the Sarawakku Sayang Special Assistance Package which among others gives aid to the low-income (B40) group, frontliners working during the MCO period to fight Covid-19, as well as small and medium-scale entrepreneurs in the state.

He said the Sarawakku Sayang Special Assistance Package was a short-term measure while in the long term, the state government had big projects which would boost economic growth.

Abang Johari said the Sarawak government will expedite the distribution of the aid through government agencies such as the Inland Revenue Department and through a special committee headed by State Secretary Datuk Amar Jaul Samion.

He said both digital and conventional modes of payment could be used to channel the aid to the target groups.

“We will also appoint our representatives who can channel food supplies to rural areas,” he said.

Abang Johari said the decision by the state government to announce its assistance package earlier than the federal government’s economic stimulus package was based on its priority to help the people as quickly as possible to face the current situation.

“It is not that we do not appreciate, but we are afraid that it is late. We have to look after ourselves first, which is why I announced it early. We have the resources, and we are giving it to the people,” he said. – Bernama