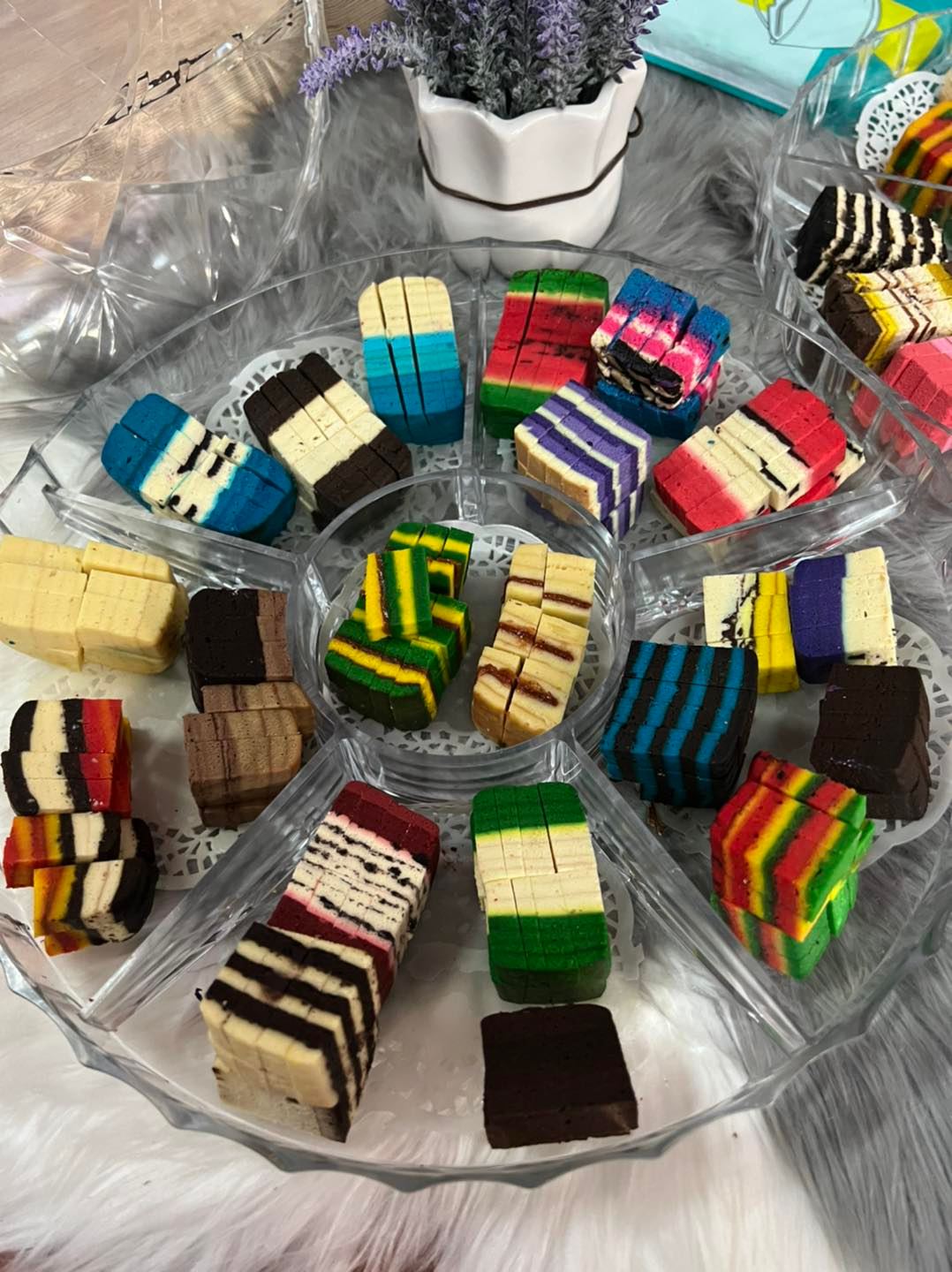 To describe kek lapis or Sarawak layer cake as an iconic Sarawakian dessert may not do it enough justice — it has become part of the Sarawakian identity. It is served not only during festive seasons such as Hari Raya Aidilfitri, Gawai and Christmas, but can be purchased all year long. Not only is it a favourite among Sarawakians, kek lapis also has legions of fans from beyond the shores.

To describe kek lapis or Sarawak layer cake as an iconic Sarawakian dessert may not do it enough justice — it has become part of the Sarawakian identity.

It is first known as a layer cake with spices found in Indonesian called Betawi layer cake or Kek Lapis Betawi.

Thus, it was first introduced by the Betawi people from Jakarta when they came to Sarawak circa 1970s and 1980s.

However, what made the Sarawak layer cake to have its own identity is that most of the bakers got more creative with how they interpreted the cake.

Mixing new flavorus and adding new colours, the kek lapis rebooted to become what we know today as the Sarawak layer cake.

Just like any other dessert, it is served not only during festive seasons such as Hari Raya Aidilfitri, Gawai and Christmas, but can be purchased all year long.

Nowadays, you can get the layer cake at almost any cake shop in Sarawak.

All three women have been doing kek lapis for more than a decade with Urai being the more experienced having more than 20 years under her belt.

The three business owners gave some insight on this legendary Sarawakian dessert and their business journey through the years.

What makes the Sarawak layer cake be in its own league is that it is not just about having a variety of great flavour, but various unique names along with it.

From cheese ice-cream to red velvet, chocolate-strawberry to ‘Lumut’ cake, the flavours can be sixty to a hundred types.

“We did hundreds of rolls, sometimes up to five hundred rolls, especially during festive seasons,” said Haslinda.

She said among the best sellers are the Cadbury flavour and Sisik Ikan flavour.

Zainun, on the hand said that she made the cakes based on the demands from the customers.

“I would say some of the best sellers are Holiday Inn, Sabok Tun Razak, Proton Saga, and also Lapis India” she said.

Meanwhile, Dayang Urai explained that she sells over 60 different types of layer cake, and among her best sellers are Masam Manis and Evergreen to name a few.

Though the ingredients might be the same besides its name and flavour, what makes the layer cake distinctive is how it is made.

Haslinda said the reason why their layer cake is wonderful is that it is homemade.

“We never manufacture it in the factory as all are made at home. We follow our own qualities in terms of the ingredients, so in a way it is different from others in the same business as us,” she said.

Zainun on the other hand professed that it is all in the flavour but then again, it depends on the customer’s taste.

“The name of the cake might be the same as others, but the taste and flavour is different.

“Plus we never reveal the real measurements of the ingredients used, and whether bakers strictly follow the recipe or not. It could be that the recipe is modified,” she said.

The COVID-19 indeed slowed everything down and the kek lapis business was not an exception.

It has been two years since the pandemic began, and as the country transitions into the endemic phase and the international borders have reopened, all business owners including these business owners can finally heave a sigh of relief.

Haslinda admitted that after COVID-19 hit the state, sales were not as good as the previous years.

“It is due to the people from Peninsular Malaysia not being able to come here, thus it became the reason why our sales were down compared to previous years.

“Now they are able to come here and the sales are starting to increase again,” she said.

Similarly Zainun said during the festive season in the first two years, the sales were less than what she had recorded previously.

“The customers will buy the cake but in lesser quantity than what they used to and because there was not much of a celebration, I decided to make a combo pack of each cake,” she recalled.

Urai said her sales were affected too because there were not many tourists to buy her cake.

“The tourists were not around during the pandemic, so the sales and receptions were a bit slower than the usual. Now, we’re back” she said.

Challenges in business and overcoming it

In doing any sort of business, making it a successful one is not as easy as we all think. Challenges and setbacks make it difficult for all business owners.

Haslinda said that currently, the hike in price of raw ingredients and materials is one of the major setbacks, because the implication is that the price of the cake would increase as well.

She then however, clarified that despite the cost, they made sure the price of the cake remains the same as when they started selling it back in 2011.

“I’ve had people ask me, how come I didn’t raise the price of the cake and I said, we refuse to do that because we have loyal customers out there who love our cake very much.

“We will never increase the price of our cake. Ever,” she added.

Meanwhile, Zainun said that rivalry is part of the challenges she faced during her time in this business.

“Sometimes, because the price I put on the cake is expensive when the customers see it, they decide to buy from other bakers who sell them for much cheaper,” she said.

But she refuses to let this slow her down and just keeps moving.

“At the same time, if the customers love the cakes that we made, no matter what, they will always come to us and buy our cakes,” said Zainun.

Urai on the other hand said the rising prices of ingredients have become a challenge in keeping the business moving.

“Now we’re in 2022, the price of raw ingredients is so much higher than before,” she said.

Haslinda hopes her business will grow as the years go by and that she will be able to open another shop somewhere else someday.

“I really hope that our sales get bigger and much better than before,” she added.

Likewise, Zainun also wishes that her business will grow and dreams of opening her own cake shop.

“But I know it won’t be that easy. We need a budget to do so, plus we have to have the commitment,” she added.

Favoured outside the state

The Sarawak layer cake is not just a favourite among Sarawakians but also those living beyond its shores.

Haslinda said people from Peninsular Malaysia loved the cake, and she even has customers from Indonesia and Western foreigners who also bought her layer cake.

Urai said that over the years, she had loyal customers from Johor, Singapore and even Brunei, who often requested that the cake be delivered to them. She explained that the customers always ordered in bulk and that the cost of delivery is a stunning RM800 to RM1000 per box.