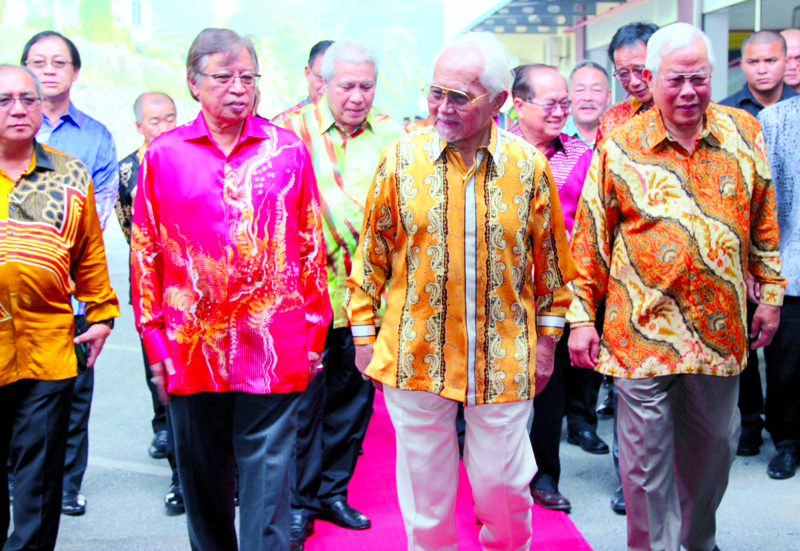 Over the past three years as chief minister, Datuk Patinggi Abang Johari Tun Openg has made significant progress in education, rural development and economy.

He is no stranger to the scene, having been involved in politics for almost 40 years, serving in various ministries and being promoted as deputy chief minister before assuming his current role in January 2017.

With a clear vision for the state in mind, the Gabungan Parti Sarawak (GPS) chairman is determined to drive Sarawak towards its goal of achieving developed state status by 2030.

During a special interview with the media fraternity in conjunction with his third anniversary as chief minister, he recapped the major achievements of his tenure and shared his views on and insights into Sarawak’s future.

Below are excerpts of Abang Johari’s interview.

Q: Could you share with us your journey as the chief minister?

A: After the late Tok Nan (former chief minister Pehin Seri Adenan Satem), I took over and the journey started when I have to pursue what has been promised in our election manifesto in 2016.  For the last three years, I am guided by the manifesto. One of it is very significant, that is the devolution of powers and we want to get back those powers under the Malaysia Agreement 1963 (MA63).

During the late Tok Nan’s tenure in office, we have succeeded in the areas of devolution of powers and this is only on the administrative part. But now, we are at the important phase which involves the legal position of Sarawak within MA63.

So, that is one of the challenges that I have to pursue. Thank God, I am still on the right path.

Secondly, I have to strengthen Sarawak’s fundamentals, particularly in economy. Today, technology plays a very important role in our economy as technology is the driving force in our economic transformation, which is why I took the initiative to transform our economy.

That is why during the first year as the chief minister, I initiated the International Digital Economy Conference Sarawak (IDECS) to get the right input from experts and from there on how we can manage and transform our economy based on the latest technology.

The outcome of IDECS was the formation of the Sarawak Multimedia Authority (SMA), where it acts as a regulatory authority that will be in charge of this digital transformation.

And if you were to be strong in a new economy that is based on Industrial Revolution 4.0 (IR 4.0), there is a need to have a long-term policy on digitalisation. I think that is the key, because of the fact that we are a very vast state but we have a very small population.

Talking about the rural community, the Dayaks feel they should get more attention. Why is this so and how do we address this issue?

Well, I feel this has got to do with politics. But the majority of the Dayaks want to progress with the other indigenous group and other races.

I think this is not a problem. The only issue is native customary rights (NCR); it is a misconception on the NCR land.

It is a very complicated issue because some claim that the land is theirs while some say no.

That is why we amended the Land Code so that if there is evidence to show that the land belongs to the natives, we will recognise the land for development.

Despite your commitment to address this issue by amending certain sections of the Land Code, why are they still not satisfied?

This is because there is politics involved, which is the problem. People are made used of because of greed and instigation. There are cases where land- owners want to change the status of native land to mixed zone. Why?

We fear for the people… they will lose their land. This is because there are some commercial people behind this. We do not know, but the trend is there, and we have records, and we need to be very careful on this. It is very complicated.

But as far as the government is concerned, we want to be fair to everybody. Of course, some want to play racial. If you noticed on Facebook, it can be very racial. My deputy chief minister (Datuk Amar Douglas Uggah Embas) was affected by this racial sentiment. There are cases like this and they cannot be avoided.

Are you happy with the performance of your YBs?

I am happy though there are some who still need to work hard. Now, we are monitoring. We are in the process of grooming new leaders.  We have to look at the future. So the question of grooming is still there. Particularly in our Parti Pesaka Bumiputera Bersatu (PBB), we are grooming people.

The criterion is just like what my predecessor did. Those selected must have the experience to run a multi-racial and multi religious country and they must also know the sensitivity of the people.

That is the basic. Experience is important too. Now it is my turn to assess people, last time I was assessed by other people. So the process continues.

Are you satisfied with what the state government has achieved over the past three years?

Yes. To a certain extent, I think we have fulfilled what we set out to do. However, there are certain grey areas in terms of understanding between the federal and state governments which have to be discussed fully.

In terms of our direction, it is clear. People are accepting what we should do for the future and we are in good hands — our policies are in tune with what the people want. At the same time, we must keep abreast with the whole ecosystem, what is going on in this region.

If we have good relationships among our neighbours, we can move forward further, such as the Sarawak Trade and Tourism Office Singapore (Statos) bringing about certain benefits since its establishment there. In terms of basic policies, I am very satisfied.

How do you rate Sarawak’s performance?

I look at the rating by Standard and Poor (S&P) Global Ratings, they give us the rating of ‘A-‘, and they say the performance of Sarawak is better than Malaysia’s.

But it also cautioned that if something happens to Malaysia, Sarawak will be affected. If Malaysia is not that good, it will pull down Sarawak.

What was your biggest achievement last year?

It was the support that I got from the people and the civil servants — the implementers who can understand and follow our policies.

Our financial model has enabled us to have a new approach in terms of projek rakyat (people’s projects). Our Rural Transformation Programme (RTP) is not topdown, it is down-upwards.

When they request for it, we study it and if we feel it should be done, we do it.

What is your 2020 resolution and dream for Sarawak?

As we are entering a new decade, we have already set a target that by the year 2030, Sarawak will be a developed state within the Federation of Malaysia.

In achieving all this, we need to lay out all the basic necessities needed for the rural areas.

That is why in the last two years, I have initiated the development of rural infrastructure where I use the alternative funding for us to finance all these strategic projects which will take at least six years to complete.

The state government is also in the process of building a few major bridges, including the ones in the rural areas. And this road and bridge connectivity besides digital infrastructure will be enhanced.

When roads, water and electricity facilities are covered across Sarawak, the rural areas will definitely open up and have big potentials.

Therefore, 2020 is the beginning of a new era where as I said digitalisation will become the prime focus, and at the same time transform our rural economy based on modern agriculture.