He said the state still has a reserve of RM32 billion.

“We will not go bankrupt. Here I want to emphasise that we still have RM32 billion in reserve so we won’t go bankrupt.”

We produce below Abang Johari’s full text of speech:

Today, we come together to reflect on the future. Reflecting on the fate of our grandchildren, what will they face, and what about their standard of living — has it improved? Still the same? Or is it going backwards? 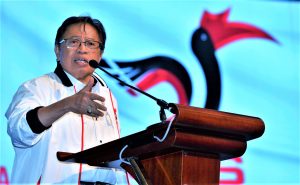 So, I want to share with you a few things about our struggle in GPS.

GPS has nine pillars where everything is important but more importantly, we support the constitution. We are fighting in accordance with the Malaysian Constitution and the Sarawak Constitution — this is our first milestone.

Second, we respect the law. We are law abiding Sarawak. We operate based on the law.

These three are the cornerstone of our party’s struggle.

Since it (GPS) was established more than a year ago, we have been on the field to meet with the people to introduce our party. Thankfully, Sarawakians are responding to the call and struggle of GPS.

This will be our foundation, for us to fight and protect Sarawak interests within the Federation of Malaysia. Therefore, we must know in our efforts to defend our rights, what the direction of our state’s development is.

By 2030, Sarawak must become a high-income state based on high income economy and also become a model for states in Malaysia. In this regard, I would like to touch on GPS’ targets — if we are to become a state of high-income economy, we must be prepared with policies that can transform our people and our country — this is the basis for GPS.

We have to be a beneficiary; we have to be forward-looking and we must provide talent among the people towards a high-income economy — this is a key direction for us.

I believe my fellow ministers have provided you with all the information on the actions we have taken that lead to high-income economic policies.

So, let me talk about the infrastructure development goals for the whole of Sarawak. We are already experiencing development in our state, but what we have is not enough.

In the past, the late Tok Nan said our roads were not enough. So, he wants Sarawak to have its own highway just like in the Peninsula which has the North South Highway and the East West Highway.

According to Adenan, travel to Lawas from Kuching can cause a “broken waist”. Therefore, we should develop areas with economic potential such as coastal areas, villages and longhouses.

This is where we find our weaknesses — usually, we will wait for the federal government to provide us with funds to build the roads. This time we change — we will build our own roads (based on the needs of Sarawakians).

Therefore, we build coastal and secondary roads as well increase electricity and water supplies to rural areas. At the same time, we are aware that longhouses should also be connected to road amenities — many longhouses in Sarawak still do not have access to roads despite our 56 years of independence.

Next is about rural development where we want conventional agriculture to turn to modern agriculture. This is the hope of the villagers. That is why every year we are allocating a lot of budget to the rural community — we want their economy to be better. This is also one area of our focus in distributing the provision for rural development through rural networks and smart agriculture.

The sixth agenda is that we want to build a business community so that SMEs can be developed between urban and rural areas.

These are the struggles of GPS — which can defend and develop our state. 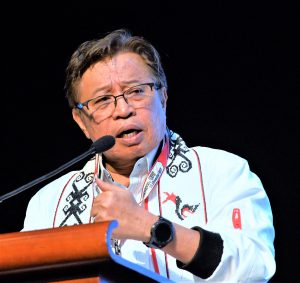 Some say, if we implement development projects as planned, in three years we will go bankrupt. Rest assured, Sarawakians are not paloi (stupid). For two consecutive years we have allocated RM10 billion for our state. They are shocked by this — they ask how Sarawak spends RM10 billion? Fortunately, they were only shocked and did not have a heart attack.

Last time, Tok Nan asked for royalties — the party “over there” promised 20 per cent royalties as long as we shared 50 per cent of its revenue with them.

Team Adenan promised that we would fight for our rights in our manifesto. We have stuck to it (even though Adenan is no longer around) and we still continue what we have fought for during his legacy till now.

In our 2016 manifesto, the second thing we promised the people is to develop rural areas. We promised to build the Batang Lupar bridge, but all were left in the lurch when the federal government canceled funding for the project. And then when Sarawak took over, we the project became a reality — for the convenience of the surrounding population.

With this in mind, I look for ways to continue developing where the federal government left off. Kami nda bulak, tu kerja kami (we are not lying, this is our responsibility).

In the same manifesto, we promised to repair dilapidated schools. However, the federal government says they have no money — so I say, let’s lend them money to build roads and repair dilapidated schools in Sarawak. Strangely, they say we (Sarawak) still owe them RM2 billion. It is their responsibility to lend money to the state government (in accordance with the Constitution).

Apart from that, they also collect taxes from us but, where did all that money go? They say because we owe RM2 billion, that’s why they collect taxes from us. Then I said, let’s pay RM1 billion first. It is not we want to show off but we want our children to have good and comfortable school buildings for them to learn.

Another thing I would like to share here is that they (federal) are shocked that Sarawak has been able to implement projects with its own funds after the government changed.

In the past, they said Sarawak would be poor because they would not be able to carry out its rural development projects because of lack of funds. Funds are controlled by the federal…RTM and the internet they want to also control.

When I announced the RM10 billion budget — federal says this is David Copperfield’s budget. So, the first thing I did after becoming chief minister was to set up DBOS — the banking institution that will help us.

We have really big revenue. We saved our money in CIMB then, we made use of that money to make more money. Did you know the Japanese economy was bad after the war? Without the Asian Development Bank and the World Bank, Japan could not have developed as it is today. That’s why I set up our own development bank.

Last year, the raja sihir said we would go bankrupt after we borrowed RM13 billion from Development Bank. We spent that money on roads, electricity and water supplies, and bridges. If we make a calculation, RM13 billion to be paid in four years, so 13 divided by four, we will get about 3.5 (billion) which is the amount to be paid in one year.

In addition to setting up DBOS, we have also increased our share in Shell from 10 per cent to 25 per cent, giving us a dividend worth RM2 billion.

Another thing I would like to share is the 12th Malaysia Plan (12MP) where we intend to develop Sarawak. Here I want to emphasise that we still have RM32 billion in reserve so we won’t go bankrupt.

Someone said we didn’t build any airport. In the 12MP, we are planning construction of airports in Spaoh and Sungai Tunok. But that doesn’t mean today I announce this, tomorrow the airport is there. Someone on Facebook said we nadai bisi airport (don’t have an airport) because Masing is just about to start to measure the land.

We’re going to do all the construction — we’ll build the airport, Kemena and Marudi bridges are now under construction. We also build other bridges (Saribas, Batang Lassa and Batang Paloh). We also want to supply water with a water grid. Importantly, we will not depend on KL anymore. Last time, when the Rural Ministry was entrusted with making electricity connections to homes in the village, they only installed wires (no electricity was available).

Moreover, someone told me to stop the hydrogen bus project. Didn’t he know that Malaysia is promoting the use of hydrogen as a non-polluting energy in the Hydrogen Blueprint 2017? I said I would continue this project — now, even the foreign countries want to buy our hydrogen. We will produce hydrogen in three years’ time and at the moment we have a hydro plant producing hydrogen. Not only hydrogen, in Batang Ai we also produce tilapia.

If Batang Ai produces hydrogen and tilapia, our tourism industry will grow too. We have a policy in place — if the tilapia business goes well, that means our farmers will have a positive impact as well.

If we transform agriculture into smart agriculture, the rural people will also earn a living. We’ve made artificial reef balls. Last time, we relied on KL, now we do it our own — as a result, the fish population in Belawai has increased.

We continue our urban renewal programme in addition to the five-coach Autonomous Rail Transit (ART) that uses tires. It is already in Japan and China, and we are about to start this project from Kota Samarahan to Kuching.

GPS is a coalition of Sarawakians who will build Sarawak, we will continue to step up for the sake of the people of Sarawak. We fight based on the facts and with the spirit and confidence to uphold the dignity of the Sarawakians.

Importantly, Sarawakians, we will not leave Malaysia, but we will defend Sarawak through MA63.

Frankly, I want to reveal why we left BN. After 56 years of independence, we can be on our own to look after Sarawak, to protect Sarawak, to develop Sarawak, and we are the ones who will chart the future of our young Sarawakians. For this reason, that is why I give the Endowment Fund of RM1,000 to every child born in Sarawak.

I pray that we will be united and continue to fight for the future.

May we focus and give priority to Sarawak. Let us protect and fight for Sarawak.

With that, I open our convention.